Capes to Capes : from Lisboa to Gibraltar !

Here we are, at the gates of the Mediterranean Sea ! Since Lisboa, the wind is weakenig, and speeds are decreasing.

A first day in a strong favorable breeze pushed us fastly to Sines, with an average speed of 7 knots, and surfs up to 13 knots ! Sines is the last shelter before the St Vincent Cape (the most south-west point of Portugal), which is 60 miles away. We need a good weather forecast to leave Sines, and wait for a few days, while doing a few repairs at the top of the mast, doing laundry, etc. 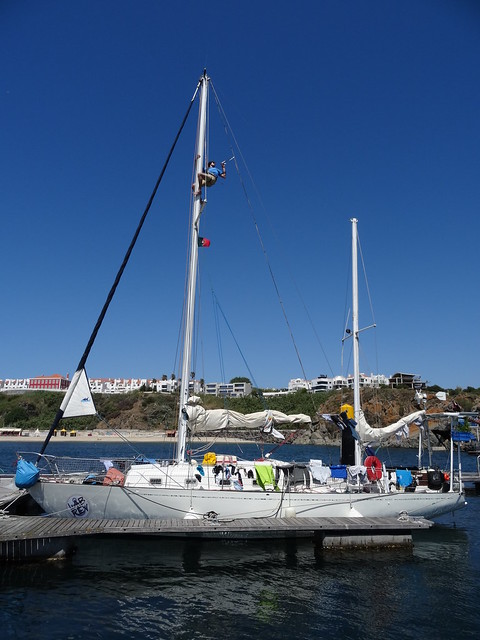 We also meet Baladin’s crew, three frenchies with whom we share tips for fishing, and exchange a few gears. Yahia, our « official fishing manager » join Karukera’s crew, and will experience the last Portugal swell with us. We pass with him the impressive cliffs of Cape St Vincent ! 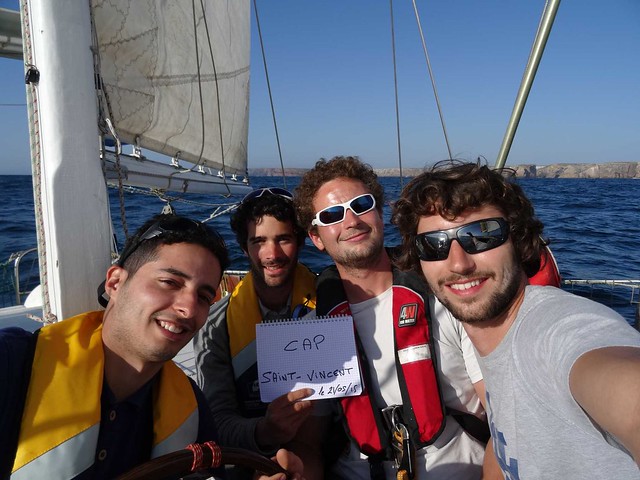 Right after the Cape the swell disapear, and altough it is not the official limit of the Mediterranean Sea, we feel we are getting closer to it ! We spend the first confortable night at sea since the departure. The new fishing line proves itself, catching a few maquerels and a little tuna ! 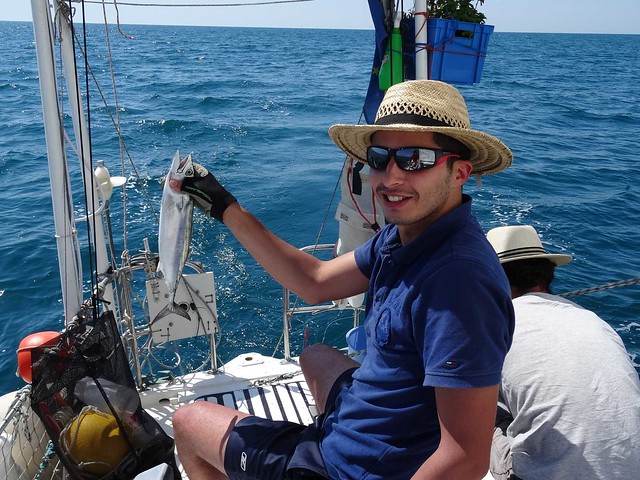 We head to Olhão, a little town located in Faro’s laguna. We cross the symbolic limit of 1000 miles since Pornic while entering the Laguna. After a night in front of the beautiful Island of Culatra, we will moor in front of Olhão’s market, the marina being forbidden to visitors (!!!). Now is the time to test if our 2 person kayak is able to support the weight of 3 persons + the groceries ! 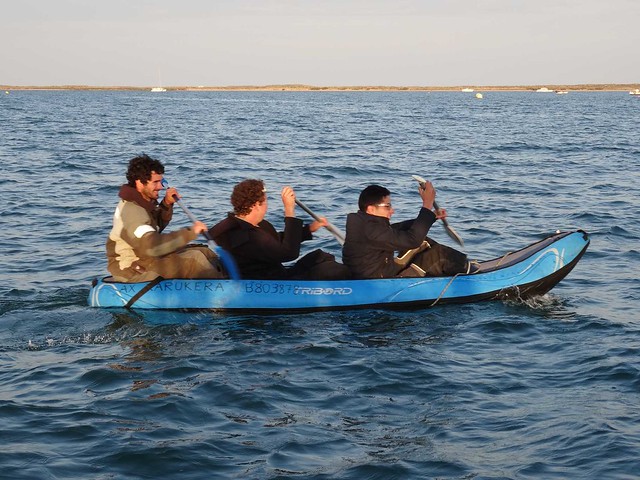 Cassandra will join us for a week, during which we will reach Rota, a little town in the bay of Cadix. The wind will totally abandon us in the middle of the crossing, right in front of the spanish border. We take advantage of the very slow speed of the boat to make a few plankton samplings for the Open Science project Plankton Planet : http://planktonplanet.org 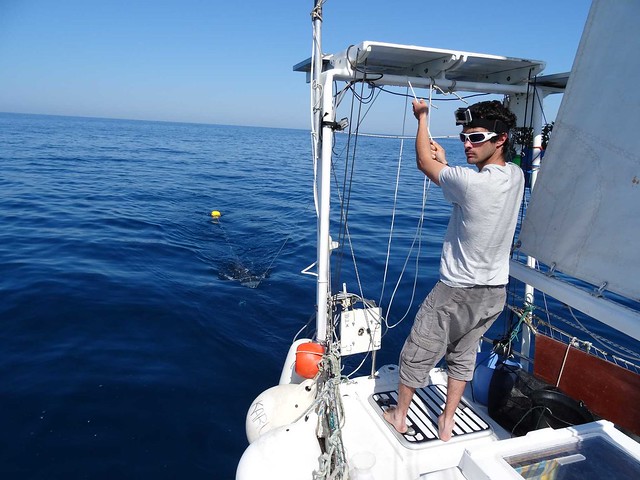 But when the boat is totally stopped, with the heat and no hurry, we enjoy a ittle swim alone in the middle of the sea ! 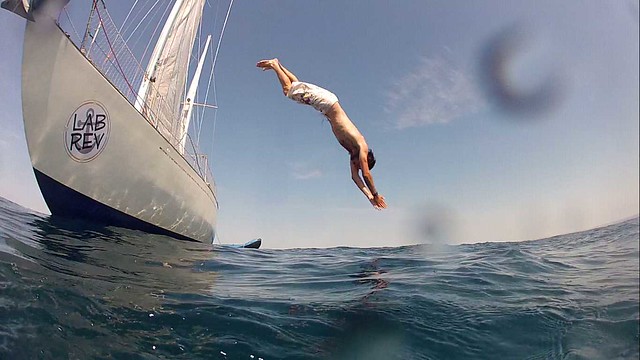 During this little swim, Oliver will discover a piece of net stuck into the propeller, that we have to remove with a knife ! This swim was a good call ! 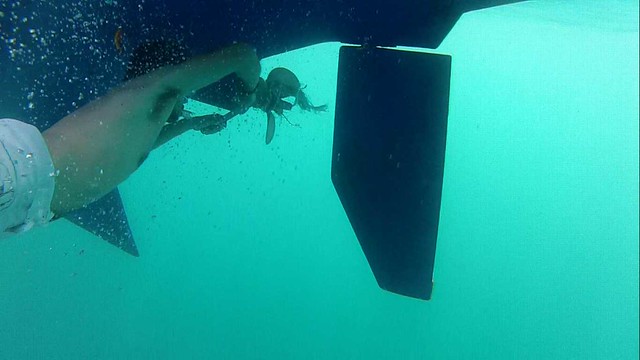 We finish the trip using the engine : oh sweet smell of frying oil ! We spend a few days in Rota, little town centered around the beach and its touristic activities : no doubt, we are arriving in the South of Spain, and its mass tourism ! We try to reach Cadix one afternoon, but the wind will get up to 50 knots, so we turn around and go back to Rota. With only a few square metters of the Genoa, we will sail at an average speed of 6 knots !

We will leave the next day, heading to Cape Trafalgar, the first point of the Gibraltar strait. No battleship for us, altough a psychological fight begins against the becalmed, that will continue for the weeks to follow… 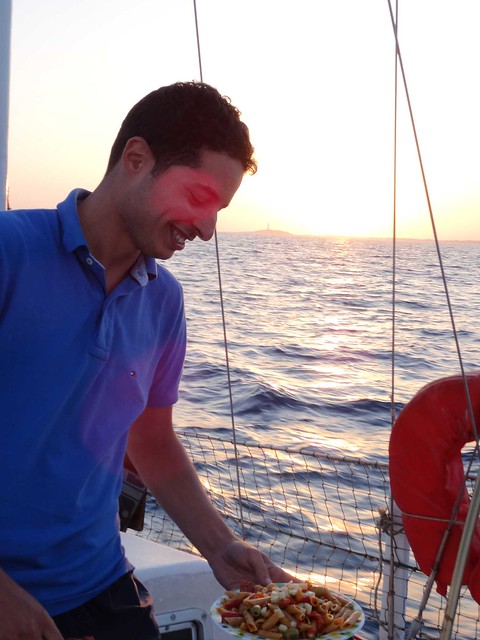 Our itinerary leads us to Tarifa, the narrowest point of the strait (only 14km from Morocco), reknown windsurf spot for its 300 days per year of 30 knots winds ! The hundreds of windturbines on the nearby mountains are here to testify it. 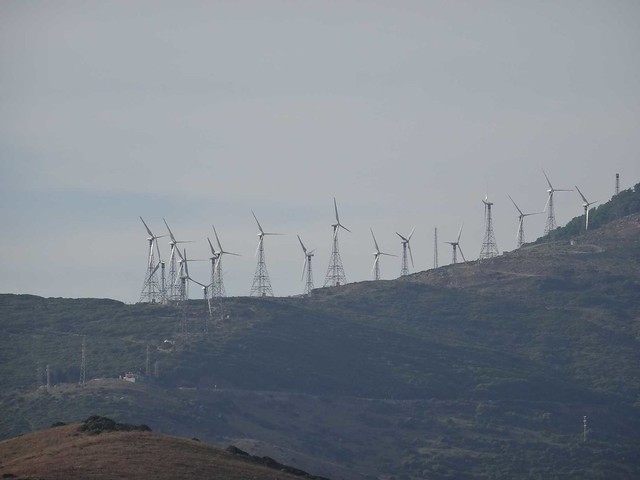 We discover the changing weather of the Mediterranean, with the wind shifting from East to West in less than two hours. This allows us to reach the Gibraltar Bay, so charming for a little sailing boat among the dozens of huge cargo ships ! The bay, reknown for its mists and random weather, will offer a hard arrival at dawn with winds shifting from 30 to 0 knots. Thankfully our AIS beacon works perfectly, and allows us to predict the huge floating buildings directions, and avoid them. 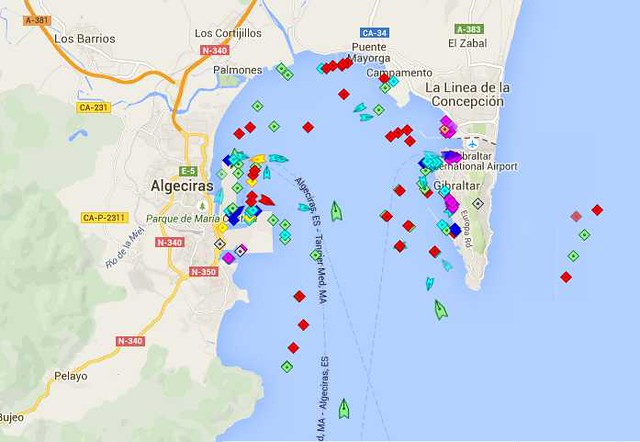 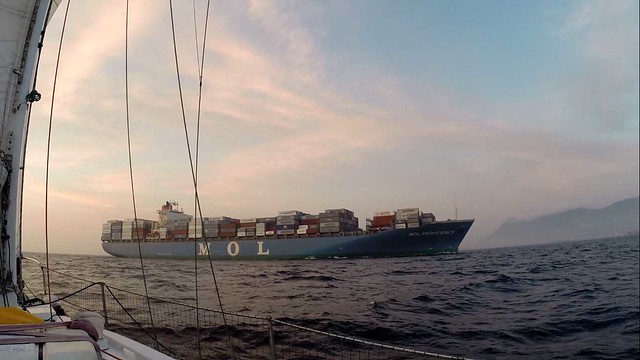 Gibraltar is one of the most important place for maritime worldtrade. This gate between the Atlantic and the Mediterranean, linking Africa and Europe, sees thousands of merchendises transit everyday. It’s also a place of high tensions, with the English enclave of Gibraltar « last colony of Europe », and its famous rock. 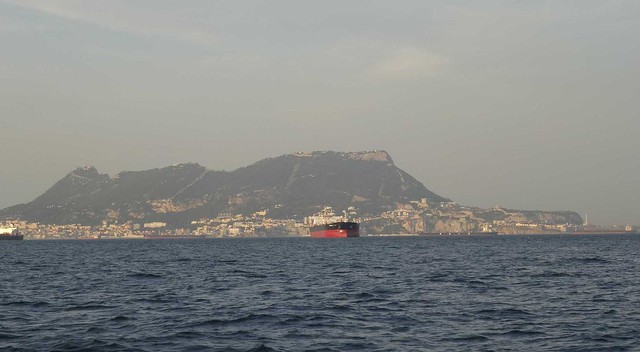 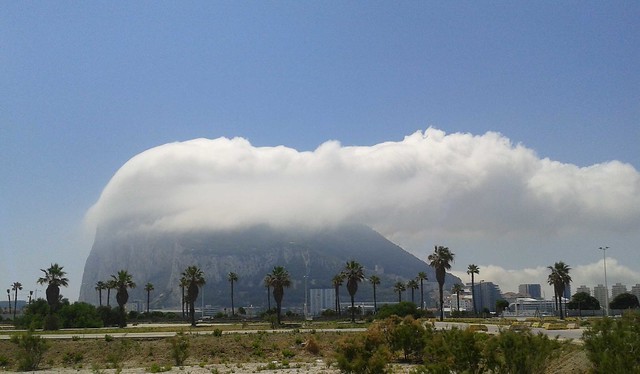 Luckily, when we had the chance to visit it, the rock was not in a cloud, and we could enjoy the view on the bay, the Mediterranean and Morocco. 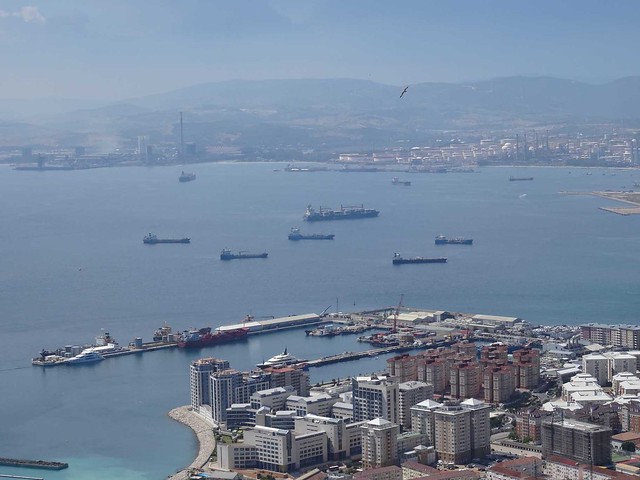 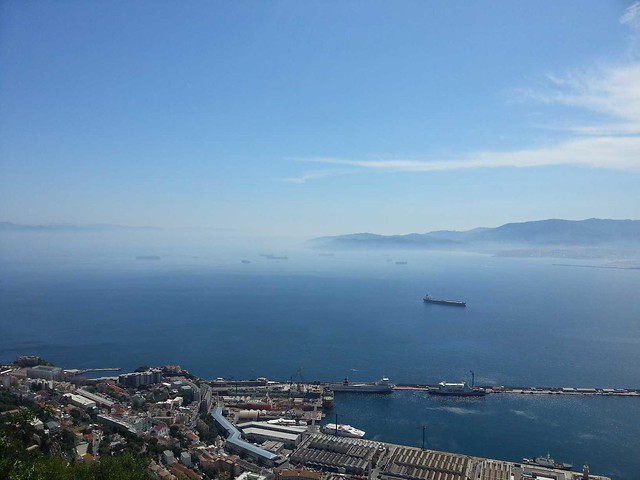 We pass Europa point the 2d of June, marking our entrance in the Mediterranean. 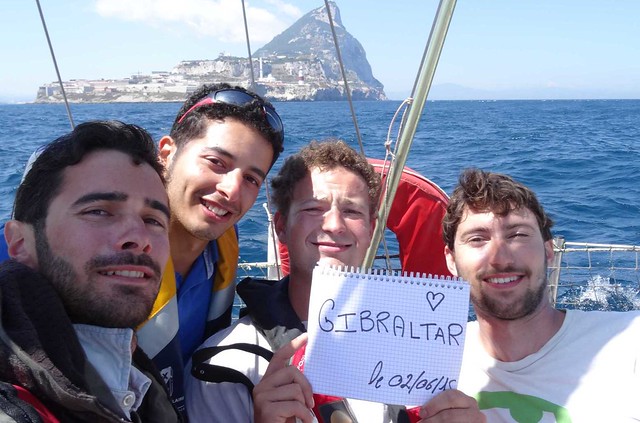 Catégorie : From Lisbon to Barcelona